The SW licensed capacity resources required for a dedicated channel (DCH or E-DCH) are described by Channel Element (CE). The number of channel elements required in a RBS is based on the traffic type and is dependent on the radio bearers to be used and on the simultaneous users for each bearer. 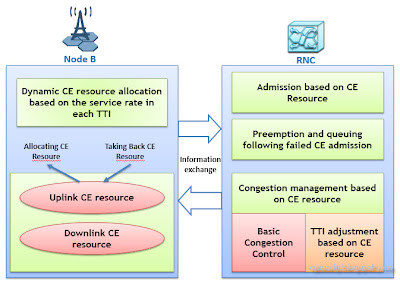 the channel demodulation capabilities of a NodeB are measured by CE unit. CEs are classified into uplink (UL) CEs and downlink (DL) CEs.

One CE still needs to be consumed if 3.4 kbit/s signaling traffic is carried on a DCH or HSPA channel. The number of CEs that need to be consumed by services of other types can be calculated by analogy. 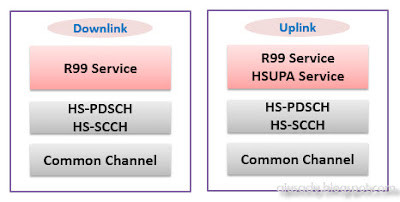 the NodeB reserve CE resources required on the UL and DL common channels; therefore, they do not occupy the licensed CE capacity. These CEs do not need to be considered in the calculation of CE consumption.

Similarly, the NodeB reserves CE resources for the high-speed downlink shared channel (HS-DSCH) and the related control channels if HSDPA is used. In the calculation of CE consumption, these CEs do not need to be considered.

For an R99 service, the RNC determines the number of CEs and NodeB credit resources that need to be consumed based on the SF that matches the maximum bit rate (MBR) of the service. 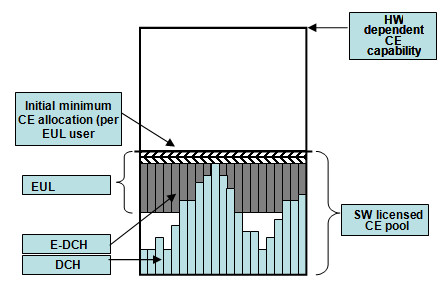 EUL can only be utilized for connections that have HS-DSCH in the DL. Traffic and signaling on an E-DCH will be carried by each admitted EUL user.

Similar to HSDPA, the E-DCH user has one serving cell. The E-DCH serving cell is always equal to the HS-DSCH serving cell for the connection. There is always at least one non-serving E-DCH cell if the terminal is in soft or softer handover.

From the SW licensed CE pool, E-DCH users consume channel elements. However, compared to A-DCH and DCH, the resources for E-DCH are handled in a different manner.

Represented by the minimum CE allocation, the channel elements are secured and are not changed by Enhanced Soft Congestion or re-scheduling in the RBS.

Therefore, reaching a minimum rate supported by the minimum CE allocation is possible for an admitted E-DCH user.

Additional channel elements will be needed if an E-DCH user requests rates higher than the rates supported by the minimum CE allocation.

These are not seen by the Admission Control function and are managed by the EUL scheduler only. If it is achievable to allocate more CEs in addition to the other two required UL resource types (air interface interference and Iub bandwidth), the EUL scheduler will give an E-DCH user a higher rate.

The additional CEs for an E-DCH user might be affected by Enhanced Soft Congestion or re-scheduling in the RBS.

If the minimum amount of channel elements is not available at the E-DCH establishment attempt it will not be possible to admit a new E-DCH user.