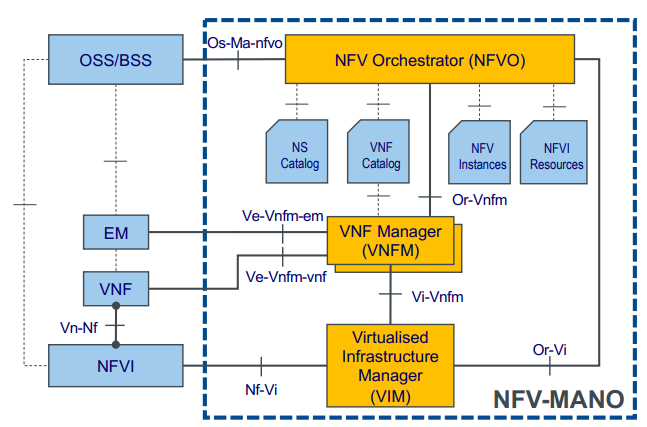 The architecture that defines traditional network devices is fairly basic because both the hardware and software are customized and tightly integrated. In contrast, NFV allows software developed by the vendors to run on generic shared hardware, creating multiple touch points for management.

The NFV architectural framework is developed to ensure that these touch points are standardized and compatible between the implementations of different vendors. This section provides a comprehensive discussion on the framework and the rationale behind its blocks. Understanding the framework enables readers to envision the flexibility and freedom of choice that NFV has to offer.

VNF (virtualized network function) replaces a vendor’s specialized hardware with systems performing the same function, yet running on Commodity hardware (Commodity hardware, in an IT context, is a device or device component that is relatively inexpensive, widely available and more or less interchangeable with other hardware of its type).

The architectural framework forms the basis of the standardization and development work and is commonly referred to as the ETSI NFV framework. At a high level, the framework encompasses the management of VNFs, relationships and interdependencies, data flow between VNFs, and resource allocation. ETSI ISG (Internet specification group) categorized these roles into three high-level blocks, namely the infrastructure block, virtualized functions block, and management block.

In ETSI’s definition, the formal names of these blocks are defined as: