Option 2 allows 5G deployments in areas without 4G coverage but there will be many areas where only LTE or 3G can be used. Voice calls, which start in 5G, therefore, need to be handed over to 4G or 3G to create a seamless voice service experience for the end-user.

Let’s look at the voice call handover from 5G to 4G.

The voice call handover from 5G to 4G is supported through ‘combo-nodes’ or ‘combo-gateways’ (ComboGW), which provide both 5G core network and EPC functionality and interfaces. From an IMS perspective, the combined SMF/Packet Data Network Gateway (PGW) provides IP address continuity during the handover between 5G and 4G. 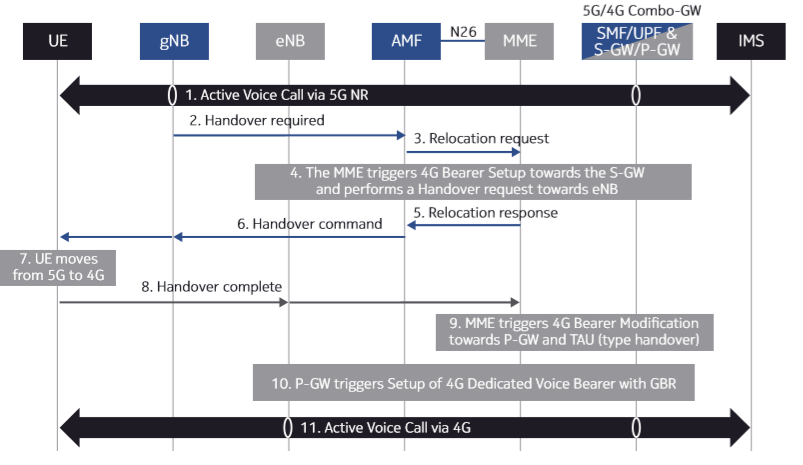 Note that in Rel-15, there is no support for voice call continuity between 5G and 3G Circuit Switched (CS). This implies that the Rel-15 mobile network using VoNR in Option 2 must also support IMS/VoLTE to allow calls to continue in 4G when the user moves beyond 5G coverage during an active voice call.
However, 3GPP Release 16 (Rel-16) will add support for enhanced Single Radio Voice Call Continuity (eSRVCC) from 5G to 3G CS.