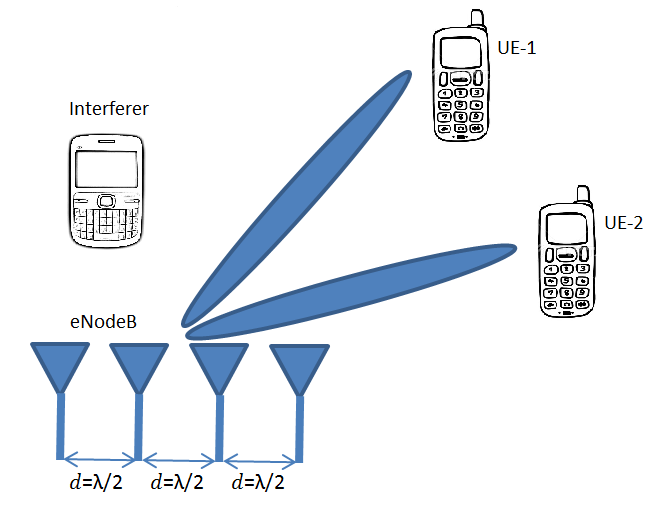 In this article, I’ll start with its motivation. Then I’ll answer the question: What is Beamforming? And also discuss its types, especially Hybrid Beamforming.

Nowadays, available bandwidth in the spectrum up through 6 GHz is no longer sufficient to satisfy the mentioned requirements. This, in turn, moved the target operating frequency bands up into the millimeter wave range for the next mobile generations.

The small wavelengths at these higher frequency bands empower applications with many antenna elements per system within tiny form factors. However, it also increases the signal-path and propagation challenges linked to operating at these frequencies.

These losses can be decreased with intelligent array design and the use of spatial signal processing techniques, including Beamforming. That type of processing techniques are enabled by large arrays. It can be utilized directly to provide higher link-level gains to overcome path loss and unwanted interference sources.

So we can agree that it overcomes the path loss issue at Higher Frequency Band.

It is a process to generate the radiated beam patterns of the antennas. By totally building up the processed signals in the direction of the desired terminals and abolishing beams of interfering signals.

But the question remains: How can it direct the signal to only the desired terminals?

In this technique, each antenna element is fed alone with the signal to be transmitted. The phase and amplitude of each signal are then added constructively and destructively. All in a way that they focus the energy into a narrow beam or lobe.

Its application has the following benefits:

So, Analog Beamformer is not suitable for a multi-user environment.

So Hybrid Beamformer enables a compromise with respect to complexity and flexibility between analog and full digital types.

Its designs are developed by gathering multiple array elements into subarray modules. A transmit/receive (T/R) module is dedicated to a subarray in the array. Thus, fewer T/R modules are needed in the system.

The number of elements and the positioning within each subarray can be chosen to ensure that system-level performance is accomplished across a range of steering angles.

Therefore, it is adopted in millimeter wave radio used in the next generation mobile networks, mainly 5G.