In this article, I will explain the Beamforming technique in 5G to compensate for path loss especially in the mmWave spectrum range. As the range of mmWaves is between 30 GHz and 300 GHz, a wavelength is between 1 millimeter and 10 millimeters and this is the intensive motive for Beamforming.

The beamforming technique focuses the RF energy into a narrow direction to allow the RF beam to propagate farther in that direction. Using this technique, non-line of sight (NLOS) RF communication in the mmWave spectrum may rely on reflection and/or diffraction of the beams to reach the UE.
If the direction becomes blocked, either because of UE movement or changes in the environment (e.g., obstacles, humidity, rain, etc.), the beam may not be able to reach the UE. Thus, in order to ensure that the UE has continuous, seamless coverage, multiple beams in as many different directions as possible may be available.

Beam sweeping: is the first operation of the four of Beam Management operations.

The measurement process is carried out with an exhaustive search, i.e., both users and base stations have a predefined codebook of directions (each identified by a beamforming vector) that cover the whole angular space and are used sequentially to transmit/receive synchronization and reference signals.

A Beam Set may contain eight different beams. For example as below figure 8 beams for eight directions. The gNB is configured to beamform for transmission of at least one of the beams OR can sweep/transmit directions using eight ports during a synchronization subframe. 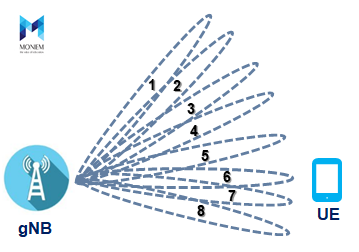 The UE is configured to determine a beam index corresponding to a beam based on a time at which a Beam Reference Signal (BRF) is received.

Here, The UE selects Beam Index (6) as it’s the “Best” beam from the UE point of view (Highest BRSRP).

After beam determination, the UE has to wait for the gNB to schedule the RACH opportunity towards the best direction that the UE just determined, for performing random access and informing the selected serving infrastructure of the optimal direction through which it has to steer its beam, in order to be properly aligned.