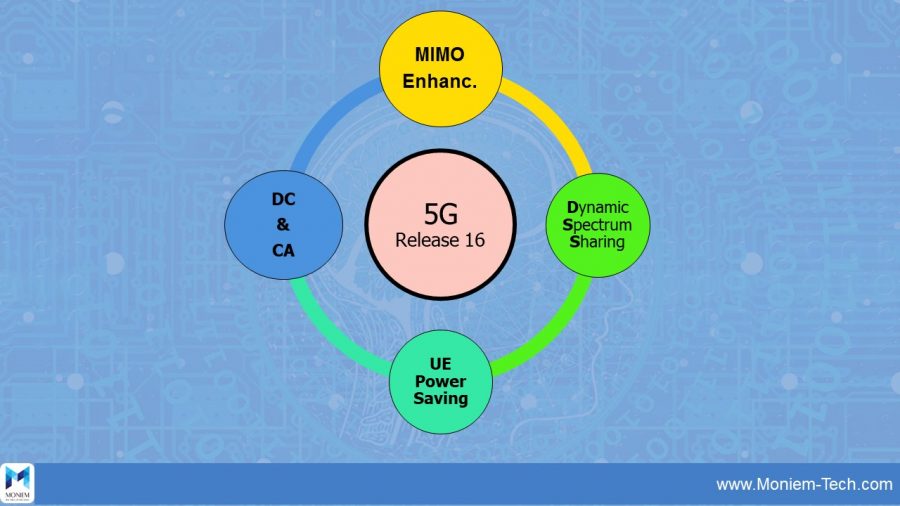 Release 16 is designed to be an 18-month project that wraps up at the end of 2019. The three key performance indicators for 5G are faster peak rates (the enhanced mobile broadband, eMBB), more connections per cell (massive machine-type communication, mMTC), and lower latency (ultra-reliable low-latency communications, URLLC).

Most of Release 15 focused on the eMBB use case. Release 16 focuses more on URLLC to expand the features that 5G enables and to increase the efficiency of the existing feature set.

Dynamic spectrum sharing (DSS)
DSS provides a cost-effective and efficient solution for enabling a smooth transition from 4G to 5G by allowing LTE and NR to share the same carrier.
In release 16, the number of rate-matching patterns available in NR has been increased to allow spectrum sharing when CA is used for LTE.

Dual Connectivity (DU) and Carrier Aggregation (CA)
Release 16 reduces latency for setup and activation of CA/DC, thereby leading to improved system capacity and the ability to achieve higher data rates.
Unlike release 15, where measurement configuration and reporting do not take place until the UE enters the fully connected state, in release 16 the connection can be resumed after periods of inactivity without the need for extensive signaling for configuration and reporting. Additionally, release 16 introduces aperiodic triggering of CSI reference signal transmissions in case of the aggregation of carriers with different numerology.