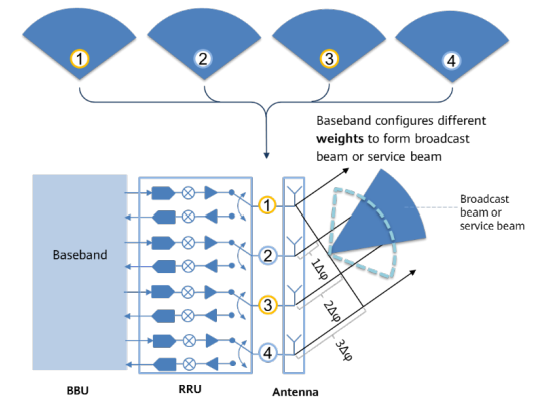 One of the most common questions I face every day What is Beamforming? How Beams are formed?, Actually I read some interesting topics from latest Huawei white paper about 8T8R Antenna Beamforming. let’s see the answer.

What are the Principles of 8T8R Beamforming?

What is the 8T8R Antenna Configuration?

Currently, there are two main types of TDD 8T8R antenna. Take Huawei antennas as an example.

How Beams are Formed?

Each RF channel uses the corresponding single column beam to radiate energy. 8T8R beamforming in the baseband configures different RF channel weights, consisting of changes to amplitude and phase of the signals for each of the eight RF ports.
The resulting radiation of the combined weighted antenna columns forms broadcast- and service beams of specific patterns and directions.

8T8R antenna signal weighting can be applied across the RF ports. By using different weighting factors, the antenna radiation characteristics such as coverage of broadcast- and service beams can be changed.