As we discussed in the last article, let’s Recap again What is DSS and why we need to use the DSS feature in 5G Roadmap deployment. Due to the occupation of its FDD-based spectrum assets, service providers are forced to choose between the acquisition of a new spectrum or refarm spectrum already in use.
Both options are costly. Therefore, the 5G NR standard offers the possibility of adapting to existing LTE deployments and sharing the spectrum used exclusively by LTE today. The enabling feature is called DSS, which is part of the overall mechanism allowing NR and LTE to coexist while using the same spectrum.

DSS has an impact on both LTE and 5G NR standards. The effect on LTE is marginal, as it is hard to change a successfully deployed technology to enable its successor.

5G NR standardization defines the features and methods that are necessary for LTE-NR co-existence. The most crucial factor in LTE-NR co-existence is being able to share the limited resources used for existing LTE systems with the user data and signals required for NR operations, without impacting LTE operation. And to achieve this, considerations on how to place NR signals and channels in the time and frequency domain on top of an existing LTE framework should be made.

The first consideration to keep in mind when designing for NR-LTE co-existence is supporting NR common signal transmission and initial access procedure while taking into account the LTE frame structure and signal transmission properties. CRS is the basic DL reference signal in LTE. When designing DSS without degrading NR performance, NR signals and channels should be placed in a way that does not overlap with the CRS in the frequency-time resources.

A 5G NR device needs to detect the synchronization signal blocks (SSB) to access the network. To maintain synchronization in time and frequency, these SSBs need to be sent periodically by the network, with a gap defined to transmit the SSB on an already occupied frequency channel used by LTE.

The NR synchronization signal block (SSB) – the essential broadcast signal that allows NR devices to detect a cell – is a one-shot transmission with a default 20ms cycle when assuming 15 kHz SCS is used for spectrum sharing. SSB needs to be transmitted without any collision with legacy LTE signals to guarantee the necessary detection performance. The SSB occupies 20 RBs and 4 OFDM symbols, which unfortunately cannot be transmitted in a normal subframe due to the conflict with LTE CRS transmission. 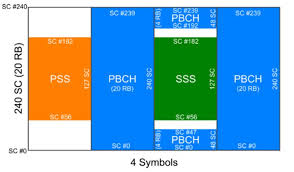 The ideal feature to allow this gap in a continuous LTE transmission is to use multimedia broadcast single frequency network (MBSFN) subframes. Defined initially to enable broadcast via an LTE network and, therefore, make the transfer of content more efficient than unicast transmissions, this feature is part of the evolved multimedia broadcast multicast services (eMBMS) functionality; eMBMS is part of 3GPP’s release 9 set of technical specifications.

SSB can be located in an LTE multicast-broadcast single-frequency network (MBSFN) subframe, which only contains LTE CRS in the LTE control region presented by LTE PDCCH.
MBFSN is a legacy LTE functionality that helps regular LTE devices skip (or not to expect CRS) certain subframe patterns as described in the LTE system information messages. DSS can utilize this functionality to use the whole subframe (except the LTE PDCCH region) for NR dedicated use. 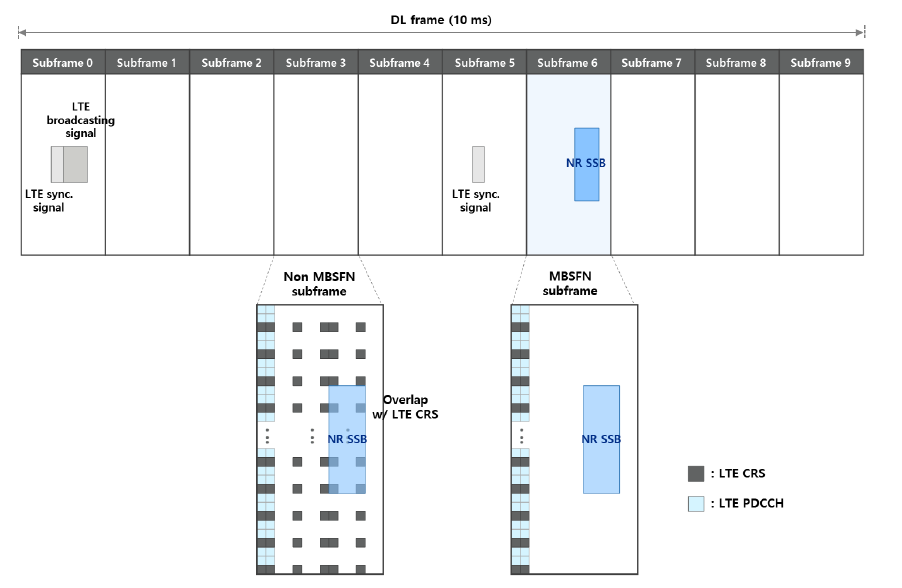 Broadcast channels and signaling messages (including SSB) transmitted during the initial access process before the RRC connection setup. In an EN-DC non-standalone (NSA) system where LTE serves as the control anchor, SSB and random access response (RAR) transmissions of NR are required, whereas, in an NR SA system, additional messages such as system information block 1 (SIB1), other system information (OSI), and paging channel are transmitted.

Stay tuned for part 3 to see How DSS dynamically allocate the PRBs to LTE and NR User!